“As I sit in the humid air, exposing my wounds, nature meets me, exposing her own wounds.”

An essay very personal and close to my heart had the honor of being published recently in the first issue of Mental Rhythm Magazine. They are a literary magazine that seeks to end the stigma around mental health, an issue I also care deeply about. So here is my very honest essay about some of my own experiences with depression and anxiety.

Being autistic means I am often overstimulated by my environment. Sounds that are tolerable to neurotypical people are disruptive, distracting, anxiety-inducing, and even painful for me. A few conversations happening in a room at once, music that’s too loud, or sudden noises are some sounds that are triggering.

Other senses are also heightened for me. Flashing lights are disorienting, bright lights are painful, fast-moving images are disruptive. My senses of taste and smell are heightened and I notice things most people don’t and get easily overloaded by multiple or intense flavors or scents. Certain textures are very disruptive as well. For example, I can’t handle anything soggy.

Normal life can be overwhelming when all these stimuli add together often causing me to be so overwhelmed that I have a meltdown or shutdown. I can’t focus, communicate, or function and pretty much freeze.

Many autistic people have similar experiences with varying sensory sensitivities.

I often get most overwhelmed being indoors because this environment is full of technology, people, and other stimuli that I am sensitive to, which all add up.

Because of that, nature has often been a relief for me from the constant sensory overload found indoors. Being outside, in nature, has brought calm and helped me out of meltdowns and shutdowns throughout my life. And I think that’s why nature has become so meaningful to me.

Plants and animals communicate in different ways. They communicate through body language and other nonverbal forms of communication, which makes it easier for me to relate to them because I don’t have to worry about trying to communicate verbally.

In nature, I can just be. Plants and animals aren’t all talking at me, demanding things of me, they are also simply living and being.

In nature, things are quieter. Yes, there are still sounds, but most of these are quiet and rather calming and peaceful, like the songs of birds or rustle of wind. Often they are simpler sounds just a few notes, compared to our indoor sounds that cover a whole range and can often be harsh frequencies or very complex and busy, becoming easily overwhelming.

In nature, life moves slower. Everyday life in a neurotypical society is often very fast-paced, we are expected to always be busy. Because of our sensitivities, autistic people can struggle to keep up with the demands of everyday life, which can lead to burnout if we keep pushing to keep up. We were meant to live life at a slower pace. Many animals and plants move at a much slower pace, spending most of their time resting, compared to their human counterparts. When I’m in nature, I slow down too, with all the plants and animals around me. I walk slow, I stop and watch, I sit and take it all in.

These are a few of the reasons I find relief in nature as an autistic person. Being with nature helps me calm down and take a break from the many overwhelming sensory, social, and mental demands of everyday life. 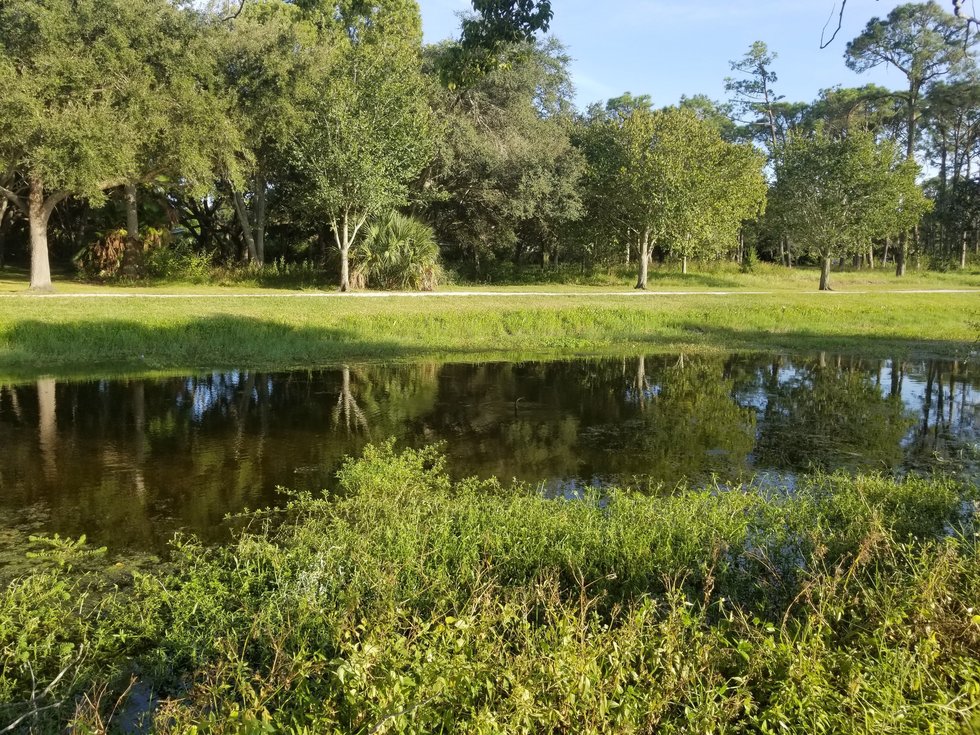 On most days, sandpipers, seagulls, pelicans, egrets, and other shorebirds line the shore. Dozens of sandpipers rummage the sand at the water’s edge, pecking for any food they can find. People are seen swimming, sunbathing, and walking up and down the beach, enjoying the warmth and sunshine.

Today, however, was different; it was pouring rain. It was one of our first days back in Florida, so my husband and I were not going to let a little rain stop us from going to the beach.

The little parking lot, that was normally packed, was empty. We left all our belongings in the car including our shoes. It was pouring so hard everything would be soaked in a few seconds. We got out of the car and ran barefoot across the pavement to the beach. I felt like a kid again, running in the rain in my swimsuit and getting soaked.

Normally Florida is hot in May, but the rain cooled everything down, and now I had an uncontrollable shiver as I walked across the wet sand. Allen jumped in as the rain splashed against the waves.

I hesitated, like I usually do, because I never know what sort of creatures might be hiding in the water. I waded in up to my knees and splashed the water with my hands. It was warmer than the air that was making me shiver. As cold as I was, the coolness was a relief since it had been hot all day in our house with broken air-conditioning.

I looked out at the Gulf of Mexico in front of me. It was strange seeing the clouds hanging so low above the ocean. They formed a dense gray fog. The waves moved up and down, pushed by the rain and gentle wind. It was almost frightening being so close to such a wild and untamed piece of nature.

My mind wandered to movies I had seen like “Castaway” and “Life of Pi” where people were stranded at sea, pushed mercilessly by the stormy waves. I shivered again and tried to not think of the miles and miles of open water in front of me.

I turned and looked around at the sand. There was not a person in sight. Usually, you could see dozens of people swimming and walking up and down Indian Rocks Beach.

I looked some more and noticed that the birds had all left too. It was eerie and quiet. It’s funny how rain can empty a beach that is normally filled with people. It was peaceful. I splashed around and savored the quiet for a moment. My head cleared and I relaxed from our long weekend of moving into our new home.

I looked at the sand on my left again; it was empty except for one lone sandpiper. The sandpiper was running around, pecking at the sand at the edge of the waves, and finding any bit of food he could. He didn’t seem bothered by the rain that was pouring on him; he was just busy going about his day as if nothing was happening.

“Allen, look at that sandpiper,” I said pointing at the sandpiper who continued pecking at the sand. I watched him run back and forth, scurrying along the beach. I was so used to seeing them in groups of dozens, but he was the only one on the beach. For a bird that is typically social, he seemed to be enjoying the solitude.

I felt like the lone sandpiper at that moment. He was the only bird at the beach, and my husband and I were the only humans there. We were all enjoying the beach like we normally do, despite the downpour and cold. The beach is enjoyable in any weather, and the sandpiper seemed to think so too.

He was probably happy to not have to worry about anyone else taking his food; he could eat in peace. Sometimes it’s nice to be alone. Maybe it’s a little eerie, but it’s also peaceful. The sandpiper continued running along the edge of the waves, pecking at the sand, and content to enjoy the beach alone.

There is something captivating about wide open expanses like the wetlands at Merritt Island Wildlife Refuge in Florida. Wild places like these have become more of a rarity due to all the overdevelopment. #merrittisland #blackpointwildlifedrive #wilderness #wildflorida #wildness #wild #wildplaces #wetlands #mangroves #swamp #landscape #nature #naturalist #naturelover #naturalflorida
Native Florida Green Tree Frog Hyla cinerea napping on a plant in the swamp. It's always exciting spotting these little guys who are about the size of your thumb. They are nocturnal and live in trees and shrubs and lay their eggs in marshes and ponds, so they are right at home here in Florida.
The Wekiva River is a magical place with crystal clear water favored by birds, manatees, turtles, alligators, snakes and many others, beautiful cabbage palms, bald cypress and aquatic plants, and the shell mounds of the Timucua people.
In the gold light of the setting sun as it illuminates the bald cypress, palms, and Spanish moss, I feel as if I am in another world. But really it's this world and for a moment my eyes are open to how truly magical it is.